Why Branded Workwear is Great for Your Team & Work EthicPop Culture: Our Favourite Lab Coat Icons

A conversation with Josephine Reynolds: One of the UK’s First Female FireFighters and Author of Fire Woman

Voted one of EDP Norfolk's 100 most Inspiring Women 2020 and author of Fire Woman, Josephine Reynolds speaks to us about her experiences as one of the first female firefighters in the UK. Born in Herts, Jo was only 17 when she decided to join the Norfolk Fire Service in 1982 and was hailed by the press as the first woman in Britain to join the brigade. Jo humbly addresses at the start of the interview that there were women before her in the war and other women in London who were also challenging the norms alongside her. In the interview we touch on the challenges Jo faced as a woman entering the fire service, the training they had to go through and the uniforms they wore in the 80’s.

Why did you want to become a firefighter in the first place?

I started as a 17 year old on the Junior Fire Fighter Course and I did it all by chance really. Honestly, I was just desperate for a job, I didn't really know what a firefighter was. I just wanted to have my own door key and be independent, get me out my parents house sort’a thing! As soon as it came out I just applied, and it just so happened that it was the first time Norfolk Fire Service had opened up their doors to women and people so young! I didn’t know any of that at the time.

I turned up and all of a sudden there was all this publicity. There were 6 of us - myself and 5 boys - I didn’t see any other women ever. Only the control room ladies.

Did it ever put you off knowing you were entering a male dominated industry? Were you worried about how you would be received?

I didn’t know any better to be honest! I didn’t even think about it, but I guess that’s possibly down to my character.

The guys I was training with - the lads - they took to me quite quickly because we had an incident with uniforms, where we were getting changed and they kept peeking! I didn’t stand for it at all, I told them where to go! But I’ve got that character - I don’t care about that stuff. I think I’ve got a bit of a reputation of being a bit spiky but I think that actually served me well.

People would mutter, and people could be closed minded. I actually asked someone recently (I used to work with them), what did they really think of me? And he said they didn’t want me there! He said “we didn’t want change, we liked things as they were and we didn’t think you could do the job.”

The Thetford guys were amazing. My boss there just said “Jo, chill out, just calm down and enjoy your job. You don’t have to prove anything here.” I did my HGV there and it was a big family, still really close. 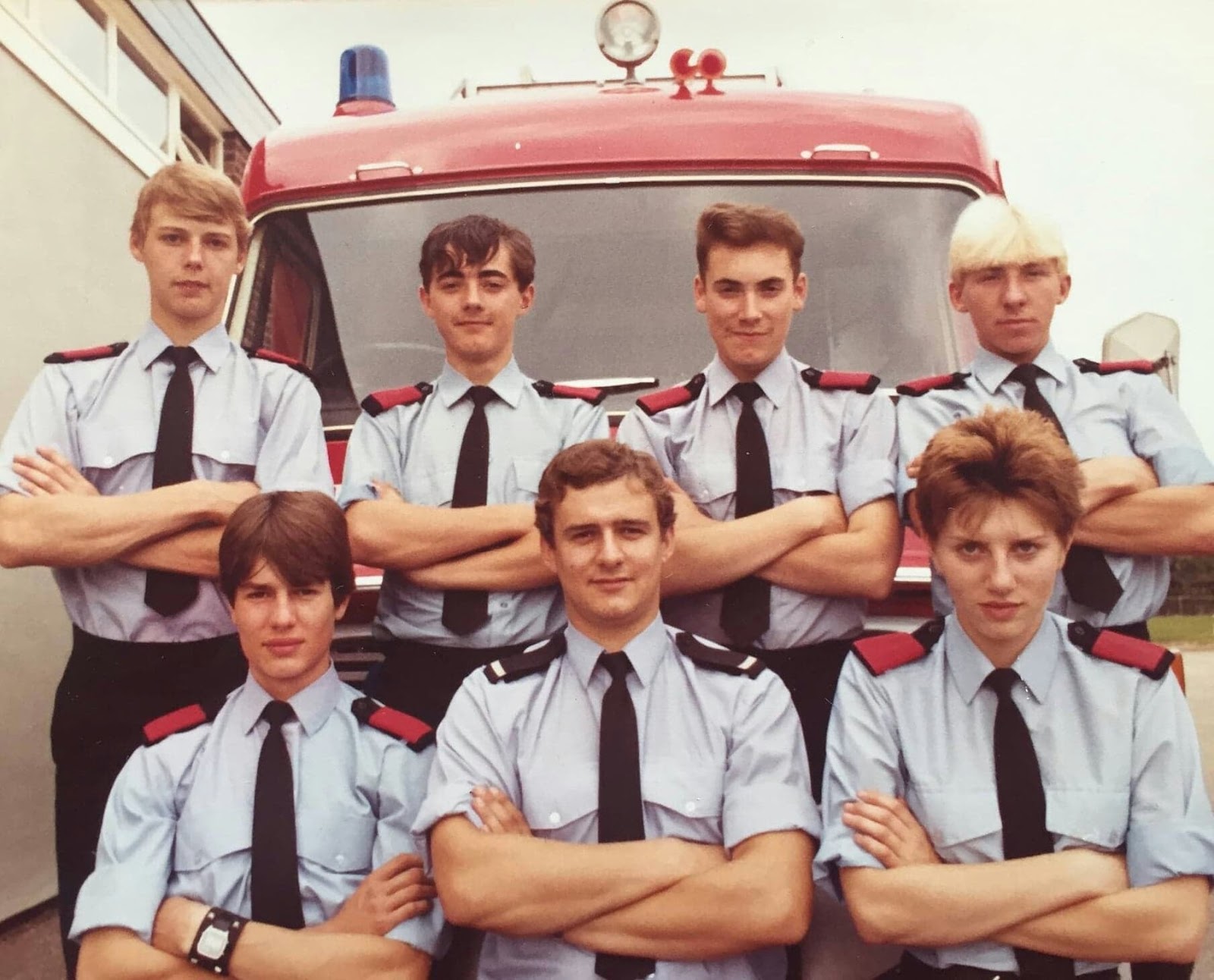 Were you treated any differently? Was there anything you got sick of hearing? Like questions, or assumptions about your capability?

Every now and then people test you. The boys were great, but some of the older guys when we went round different stations were saying things like “you’re a publicity stunt”, “you won’t last”, “you’re only here to make the brigade look all modern”. It was really nuts. The interviews were some of the worst. At my first interview, the chief said to me “Why should we employ you? How can you be sure that you’re going to be safe among the men?” and “What happens if you’ve got priorities later in life?” And I said “Well if you train me properly I don’t think any of this will be a problem.”

I was a big curiosity as I went round the stations. The guys who I actually worked with and the guys who trained me were great, we just really enjoyed it. They were under as much pressure as I was and the training was so hard. It took weeks, half way through you just think - yes I can do this. 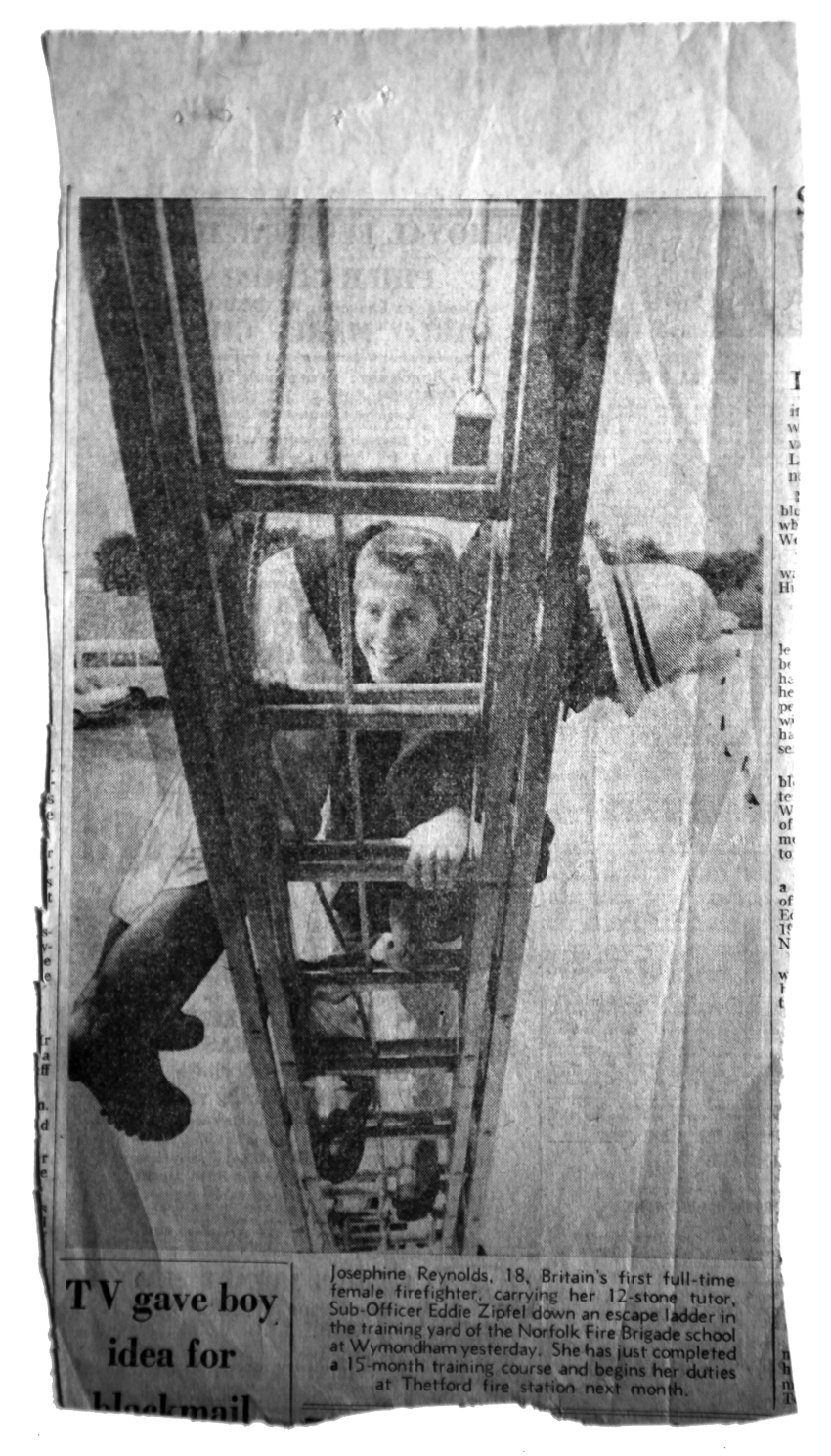 It’s unusual to have a 15 month course - it’s usually just 3. They were aiming to get young people into the brigade. We were running 7 miles every day.  It was intense physical training, weights in the gym, learning how to use the equipment (often upside down and in weird scenarios), breathing apparatus training where you’d have the mask on, your eyes covered, a cylinder on your back and you’d be put into situations where all your senses were confused, you wouldn't be able to hear or see. And then you’d have to practise a rescue in that environment, like a grain silo or a ship’s hull for example, so you could work in any conditions from chemical incidents to car accidents. You’ve got to understand the chemistry of fire, and you have to consider how it was caused and how it might react in different buildings.

We also had all these red manuals, so every morning we’d do physical training and the afternoon would be spent doing red book training in the classroom. It was hard to stay awake sometimes!

Was there any difference then between the uniform you had to wear and the mens?

No, my standard uniform was the man's one because they didn’t have a different uniform for me. They weren't really ready for it.

What were the uniforms like when you first joined? 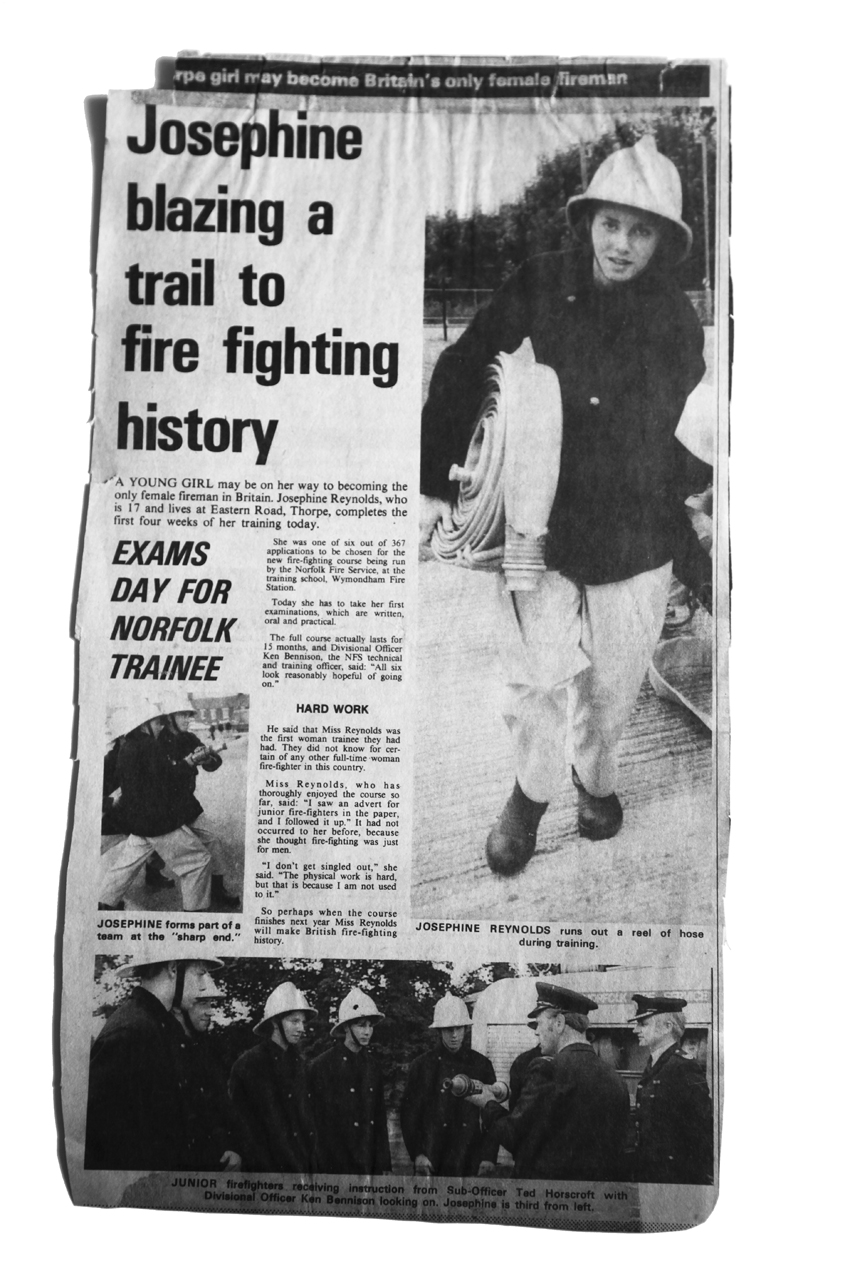 It’s really weird because the leggings were waterproof, and I think were PVC! I mean, it kept you dry, but they would have just melted if you caught on fire! They were PVC or rubber.

There would have been a heavy wool jacket, cork helmet, PVC leggings and wellies that have metal plates built in to stop you from getting nails in your feet. The plates made them really heavy to walk in! When I see the fire kit now, their stuff is so cool. It's so modern and smart and fit for purpose. But at the time, our kits were considered fit for purpose.

Did the uniforms hinder you at all?

Getting into small spaces with the cork helmet was really hard. In a Road Traffic Accident (RTA), the car is usually squashed so you don’t have much room. We used to have to then put reflective jackets over the top of our uniform to make us more visible & often use the fire engine lights to keep us in plain sight at the scene.

Were you ever concerned that your uniform was actually flammable?

We didn't think much of it then… That does sound mad, doesn't it? I’m sure we had plastic gloves too! We thought our kit was really good then. It was for the time I suppose, but in hindsight… 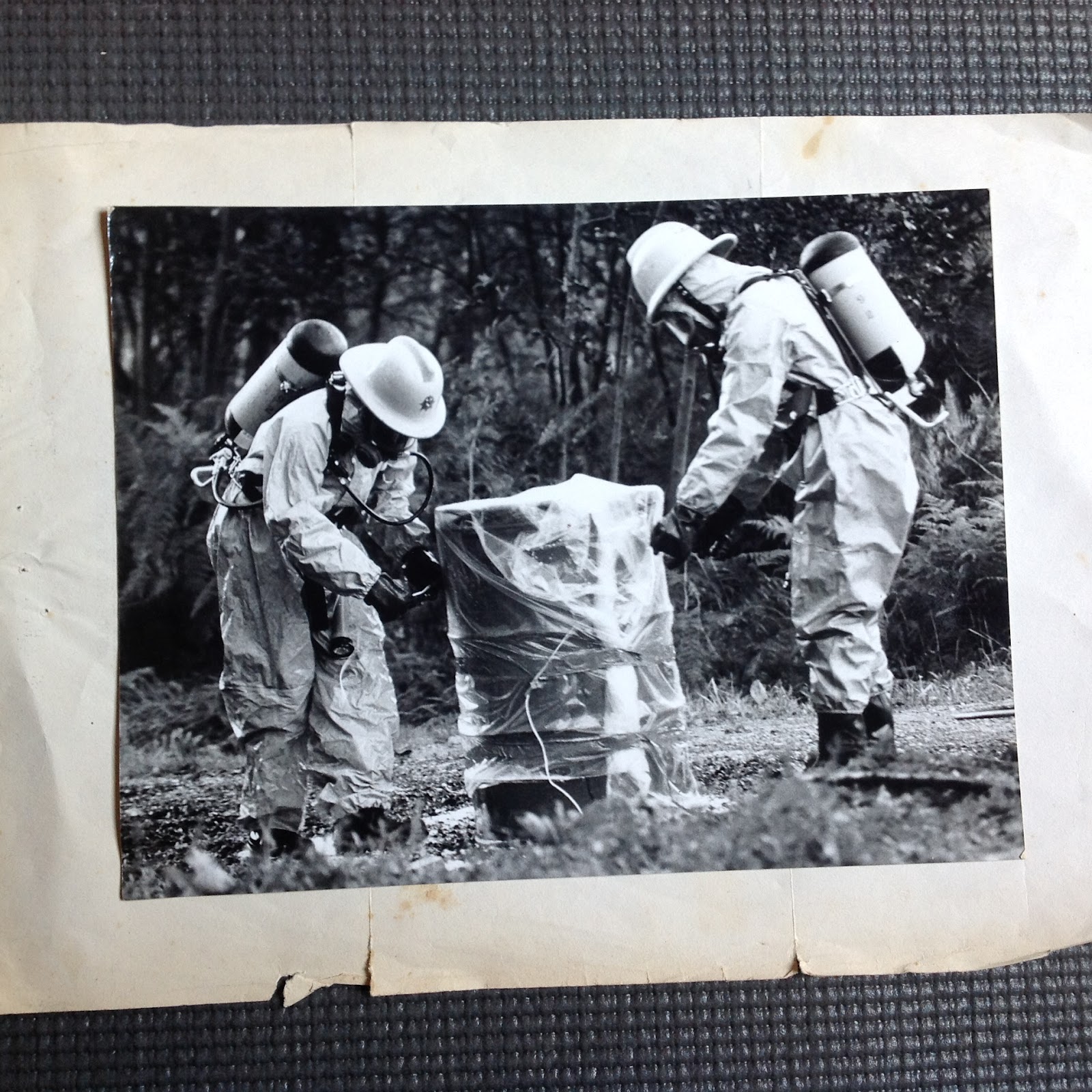 We also had a different all in one body suit for chemical instances, a big plastic thing we used to put on, and would then have to decontaminate afterwards with big water sprayers.

How much did the uniform change from when you first started? Did you see much of a development?

No, it didn't! I started in 82 and left in 89 and in that time nothing changed. But 30 years later looking at it now - wow it really has changed!

What are you most proud of during your time in the service?

Looking back, just getting through the course and getting to the passing out parade. Especially with all the press watching me and all sorts of other people. Proving that I did belong, you know?

It was always in my mind what if I failed? They would never have encouraged women back would they! 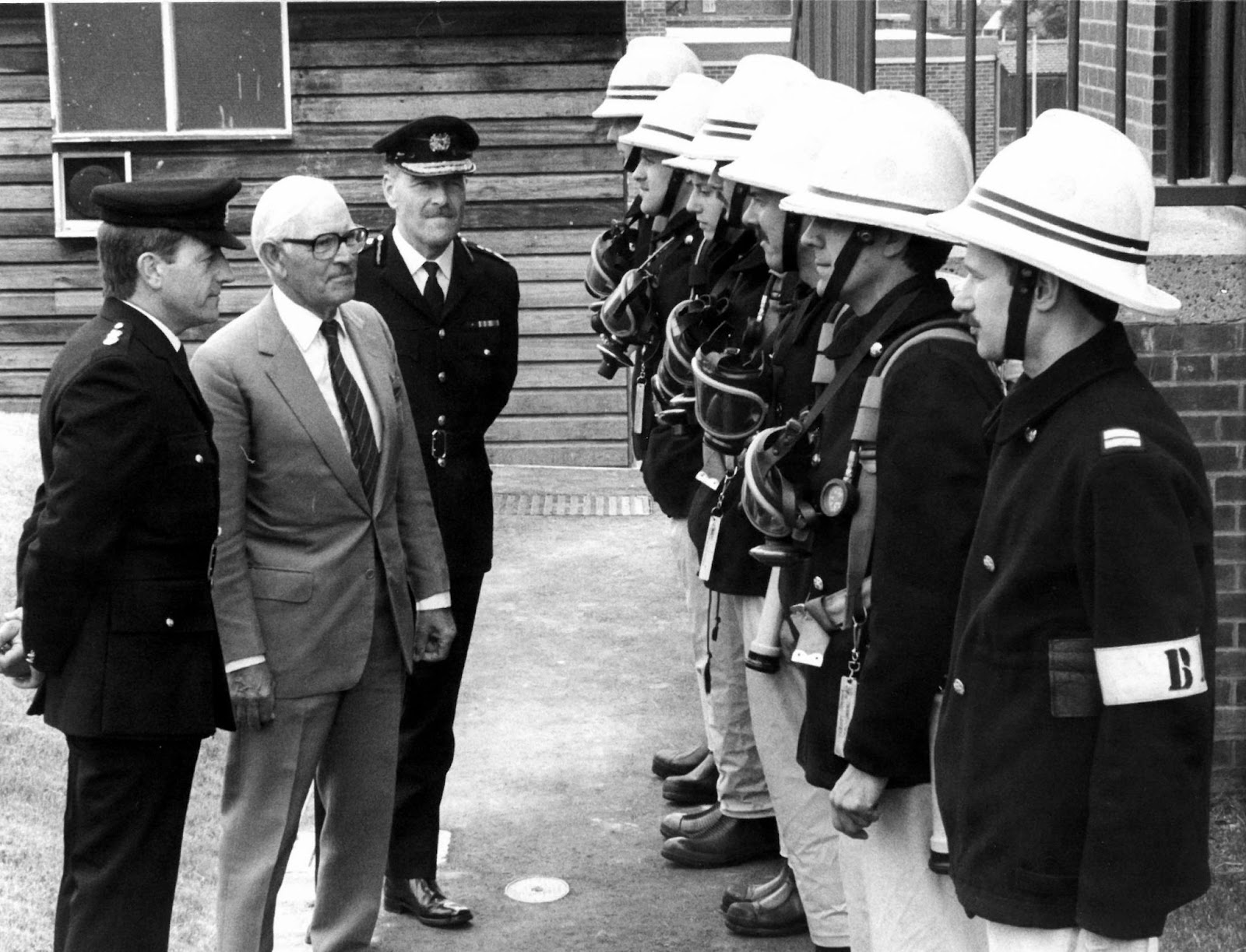 What advice would you give to women pursuing a career as a firefighter?

It’s a really wonderful job! There are loads of training initiatives out there now that you can sign up to. It’s a wonderful way to try and see if the fire service might suit you. This initiative run by Women in the Fire Service UK is a great one.

In America , and Australia they do fire camps too for 14-16 year olds and volunteer female firefighters are leading these groups. It’s all about confidence. And these girls love it, and will make great fire fighters.

That’s why I wrote my book. I felt there were no visible role models at the time, and people were encouraging me to tell my story. I wanted to give women confidence.

We at Alsico are extremely grateful that Jo spent time talking to us about her career. We found it very interesting talking to her about her uniform in the 1980’s, and we are proud to be part of the movement to advance fabric and protective clothing technology to keep our working community safe. More than ever we are seeing more women in historically male dominated industries, and at Alsico we cater to all womens fits and sizes.

At Alsico, we understand the importance of having the correct uniform for your profession. No matter what high risk industry you work in, we can supply protective garments to keep you safe on the job. Our FR garments ​​shield against welding spatter, flames, static and electric arc. If you want to get in touch about our FR range, don’t hesitate to call us on +44 (0)1772 662500 or send us an email on sales@alsico.co.uk and a member of our team will be happy to help answer your query.

Disclaimer - The uniforms used in the Fire Service are bespoke to them, we do not stock FR products of this grade.

All pictures and newspaper clippings provided by Josephine Reynolds herself and gives full permission for Alsico to use.